Trump Triumphant at Rally in Topeka, Kansas After Kavanaugh Confirmation

Trump's latest Make America Great rally was held Saturday night in Topeka at the Kansas Expocentre with an official capacity of 10,000, but many more stood outside unable to get into the packed house.

Hours before Trump took the stage, Judge Brett Kavanaugh was confirmed to the Supreme Court by a Senate vote of 50-48. It's been an amazing week for Trump, who signed a historical trade deal (USMCA) with Canada and Mexico, along with the lowest unemployment numbers recorded in 50 years.

"Just a few hours ago," Trump began after taking the stage, "the US Senate confirmed Judge Brett Kavanaugh to the US Supreme Court, and I proudly signed the judge's commission on Air Force One just before landing. This Monday night, we will perform the swearing-in ceremony for the Justice-to-be Kavanaugh, a great man. He will sit proudly alongside Justice Neil Gorsuch who is doing a great job to defend your God-given freedom." 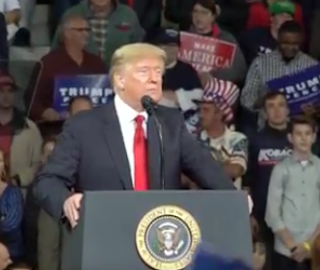 Trump blasted Democrats for their "shameless game of personal political destruction. What the Democrats did was unthinkable. They have turned into an angry mob. You've seen that today with the screaming and the shouting."

The Democrats, Trump charged, "have become too extreme and dangerous to govern. America believes in the rule of law, not the rule of the mob. We're draining the swamp and we want to defeat the Democrats conclusively." 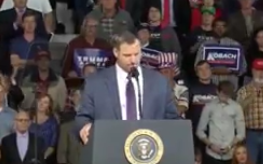 
"We're worked on a number of things," Kobach said, "but the most important thing we've worked on is stopping illegal immigration. I'm so glad we have a president who gets it. That illegal means illegal." His opponent Laura Kelly, he said, has helped illegal aliens get taxpayer dollars. "It's time to put Kansans first, not illegal aliens."


"I want to do for Kansas," Kobach said, "what President Trump has done for America. The time is now that we must reject the political correctness that Democrats are putting on us. We must stand up for faith in God and the United States Constitution."

Steve Watkins is the Republican nominee for the 2nd District seat vacated by the retiring Lynn Jenkins. His opponent is Democrat Paul Davis. Recent polls indicate a tight battle, with the election website FiveThirtyEight currently giving Republican Watkins a 5-in-9 (53%) chance of winning.


.@POTUS recognizes that this upcoming election and race for #KS02 is critical. I look forward to meeting President Trump on October 6th and sharing with him my plans to help deliver lower taxes, enhanced border security, and higher paychecks for 2nd District Residents. https://t.co/BdTglW0kHI
— Steve Watkins (@Steve4Kansas) September 27, 2018

As a military veteran, "I have seen the devil and I have seen fighters," Watkins said. "President Trump is a fighter." 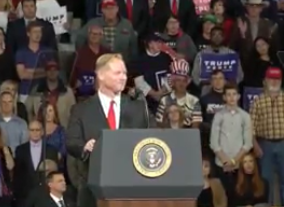 "His opponent," Trump said, "voted to raise your taxes time and time again."

"Every single Democrat in the US Senate has signed up for open borders," Trump continued, "and it's called the open borders bill and it's sponsored by, guess who, Dianne Feinstein. The leakin' Dianne Feinstein. Did you leak, Dianne? Democrats also support deadly sanctuary cities. Republicans believe we should be a sanctuary for law-abiding citizens. ICE are great people. They're tough. Democrats want to get rid of ICE."

Trump tweaked several prominent Democrats, such as Sen. Elizabeth Warren. "I have more Indian blood in me than Pocahontas," Trump said, "and I have none!"

He singled out for praise Republicans such as senators Chuck Grassley, Susan Collins, and Lindsey Graham for defending Judge Kavanaugh in the face of absurd attacks by Democrats.

"The only reason to vote for Democrats," he said, "is if you're tired of winning."

The event can be replayed on YouTube from Fox News:

Posted by Stephen Leary at 6:35 PM