The Trump Train hurtled into Erie, Pennsylvania tonight in its attempt to derail Democrats and keep a congressional majority for the president in both the House and Senate.

President Trump spoke at Erie Insurance Arena with a capacity upwards of 9,000.

Standing room only for Trump in Erie (YouTube screenshot)


Trump began by talking about the hardship of those in Florida and other states facing hardships as a result of Hurricane Michael.

His supporters, he said, have made "the greatest revolution to ever take place in our country." 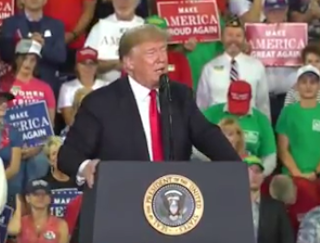 
Trump proceeded to highlight his latest victory, the confirmation of Justice Brett Kavanaugh. "What the radical Democrats did to Kavanaugh and his family is a national disgrace. You look at the false accusations, the false charges, it was a disgrace." As for withdrawing Kavanaugh's name, "I never even thought of it, folks."

Pennsylvania coal miners and steel workers are going back to work, he said. "One of the hottest industries in our country right now is American steel. US steel is opening and expanding seven different plants and spending billions of dollars doing it, and what does it mean to you? Jobs. What does it mean for our country? We can't lose the steel industry. It is thriving. We need steel for defense."

He continued his portrayal of Democrats as "the party of crime" that is too dangerous to govern, and Hillary Clinton seemed to help out with that depiction with a few shocking comments yesterday.

"You cannot be civil with a political party that wants to destroy what you stand for."

Republicans, Trump said, "are the party of jobs, jobs, jobs."

The entire event can be replayed from Right Side Broadcasting Network:

Posted by Stephen Leary at 5:35 PM