One day after his standing room only rally in Johnson City, Tennessee in support of Marsha Blackburn's campaign for the Senate, President Trump arrived at another Senate battleground, Southaven, Mississippi.

Polls show Republican Sen. Cindy Hyde-Smith in a tight battle with Democrat Mike Espy. The election is complicated by a second Republican in the race, Chris McDaniel, who garners close to 20% in recent polls, siphoning off support from Hyde-Smith.


I can answer the Commercial Appeal's question... to support my campaign for U.S. Senate! Proud to be the ONLY candidate in this race to have President Trump's full backing and endorsement! 😎😎😎https://t.co/MZKpWJVXu7
— Cindy Hyde-Smith (@cindyhydesmith) October 2, 2018

Hyde-Smith backs the nomination of Brett Kavanaugh to the Supreme Court:


Having met Brett Kavanaugh, I believe him when he says these events never happened—not three decades ago, not ever. His record of integrity and service speaks volumes regarding his character and commitment to our nation. I proudly support his confirmation. https://t.co/434g74DM7Z
— Cindy Hyde-Smith (@cindyhydesmith) October 1, 2018


The rally was held at the Landers Center, with a capacity of about 10,000. The place was jam-packed when Trump arrived with many more outside the building. 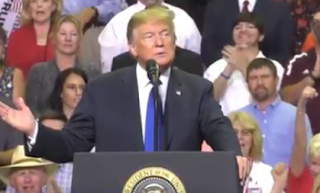 Trump touted the new USMCA trade agreement in Mexico and Canada before imploring Republicans to vote in the upcoming elections.

"The only reason to vote Democrat is if you are tired of winning." He told the story of a man whose 401(k) went up 55% since he was elected. In 2016, "it wasn't me, it was all of us. But it's all fragile. The Democrats will open our borders...to criminals. The Democrats are the party of crime. Radical Democrats want to tear down our laws, demolish our prosperity in the name of socialism, and probably worse, in service of globalism."

Judge Kavanaugh, he said, is hated by the Democrats, because "he will follow the Constitution as written." (The crowd immediately chanted, "We want Kavanaugh!") Kavanaugh, Trump said, has outstanding academic credentials and was predicted by many to be a Supreme Court justice long ago. But Democrats are voicing outrageous false charges against him. "Guilty until proven innocent, that's very dangerous for our country."

Trump spent several minutes criticizing the news media for their attacks on him and for distorting his record. "These are very, very dishonest people."

Cindy Hyde-Smith spoke for a few minutes. "We've got a lot of work to do in Washington, DC.," she said. "We've got a Supreme Court justice to get confirmed." 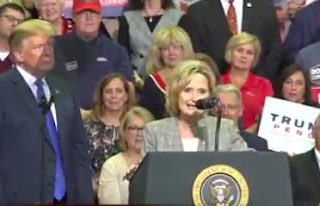 "Cindy has voted with me 100% of the time," Trump said. "A vote for Cindy is a vote for me and a vote to Make America Great Again."

A vote for her opponent, Democrat Mike Espy, is a vote for Chuck Schumer, Maxine Waters, and radical socialism, Trump said. When Espy was in Congress, he voted for taxpayer-funded health care for illegal immigrants.

The entire event can be replayed from the Right Side Broadcasting Network:

Posted by Stephen Leary at 3:01 AM