President Trump has a razor-thin margin of Republicans in the Senate and the House. Traditionally, the political party in power loses seats in midterm elections. Can Trump's massive Make America Great Again rallies in battleground states preserve his edge?

Thursday night, Trump brought his populist message to Rochester, Minnesota, where House candidate Jim Hagedorn wages a tight battle with Democrat Dan Feehan for the First District seat. Recent polls show Republican Hagedorn in the lead. The seat has been held by Democrat Tim Walz, who is vacating it to run for governor.


Trump's recent rallies have been designed to primarily support Senate candidates but this one included Hagedorn's battle for a House seat, as well as Republican Jason Lewis, who is the incumbent of Minnesota's 2nd District but faces a tough challenge from his Democrat foe. The First District is considered one of a handful of "swing districts" in the nation that might decide if Republicans keep control of the House of Representatives.

In the two Minnesota Senate races, recent polls show Democrats in the lead.

Polling for the Senate contest between Republican Karin Housley and Democrat Tina Smith, who was appointed as a replacement for the disgraced Sen. Al Franken, shows Housley is "within striking distance." Smith holds a 7-point edge but roughly 15% are undecided. 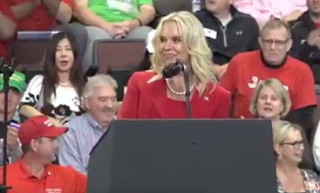 Elsewhere in Minnesota, Rep. Keith Ellison is running for Minnesota Attorney General. Democrat Ellison has been accused of physical and emotional abuse by his former girlfriend Karen Monahan. Housley has called for an investigation of Ellison by the Minnesota Office of the Attorney General. Ellison holds a slim lead in the polls over Republican Doug Wardlow.

The event was held at the Mayo Civic Center, with an official capacity of 7,200. Many more watched a live stream of the event outside.


"So this is supposed to be a Democrat state?" Trump asked immediately after appearing at the podium. "I don't think so. They have a very big surprise coming, don't you think?" 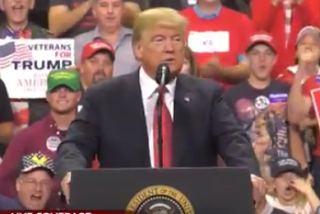 
Trump defended Judge Brett Kavanaugh and expressed his hope that he will be confirmed for the Supreme Court. "He was selected because he is an incredible intellect and an incredible person."

He listed many reasons why Democrats shouldn't be elected. "Democrats want to cripple law enforcement. They want to get rid of ICE. The Democrats embrace socialism. They open our borders to deadly drugs and violent gangs. The Democrats are truly the party of crime. Because that's what happens with open borders."

Democrat Tina Smith, Trump said, is "never gonna vote for us. She's gonna vote for Schumer and Pelosi, and the low IQ Maxine Waters. She voted against the wall. We're making a lot of progress with the wall. Tina voted for deadly sanctuary cities. Tina Smith, that nobody ever heard of, needs to be voted out of office. And Tina Smith is voting against Judge Kavanaugh." 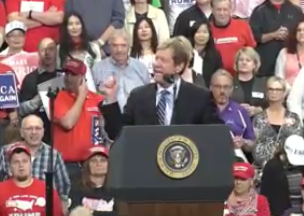 
"I want to work as a partner with you in Washington," Jim Hagedorn said to Trump. He highlighted the radical views of his opponent for the First District House seat, Democrat Jim Feehan. 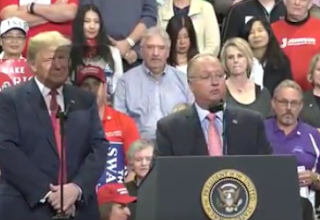 
Democrat Keith Ellison, Trump said, recently "marched in a parade wearing a shirt that read, 'I Do Not Believe in Borders.' By the way, if you don't have borders, you don't have a country. Republicans stand by proudly with ICE and law enforcement."

Trump urged the crowd to get out and vote on November 6 because the Republican edge in Congress is very slight. Will we return to the failures of the past or "will we continue into the future of American greatness?"

The entire event video can be replayed from Right Side Broadcasting Network: