Trump began by remarking that it has been a "historic week" with the confirmation of Justice Brett Kavanaugh, which drew a loud cheer from the audience. Chuck Grassley was singled out for praise for his role in shepherding the vote.
The Democrats, he said, are talking about "packing the court with radical judges. Not gonna happen."

"You don't give matches to an arsonist, and you don't give power to an angry, left-wing mob, and that's what the Democrats have become."

Trump listed some of his successes, such as historic low unemployment rates. The Iowa rate is among the lowest in its entire history. Democrats have promised jobs for minorities for decades but Trump delivered in just two years. Building the wall. Funding to help stop the opioid crisis. Iowa manufacturing jobs are growing at the fastest rate in 20 years. More Americans are working now than have ever worked before. The USMCA trade agreement. A new trade deal with South Korea.

Trump had promised a big announcement at the rally, and it was a change in regulations allowing sales of E15 ethanol blends in gasoline year-round--a priority for ethanol states like Iowa and Nebraska. "We're going with E15 year round," Trump said. "I made that promise during the campaign. Promises made, promises kept."

"Today I kept a major promise to Iowa and Nebraska." Trump stopped and asked Iowans to shout, and then Nebraskans. The shouting from Nebraskans was much louder. "All I know is you got a lot of farmers in both. And my administration is protecting ethanol. We are unleashing the power of E15 to fuel our country all years long, not eight months." 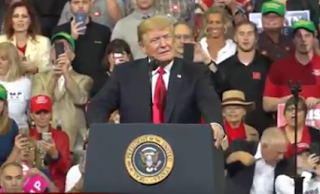 
Gasoline usually contains only 10% ethanol. The Environmental Protection Agency currently bans the high-ethanol blend E15 (which contains 15% ethanol) only during the summer months, claiming that it contributes to smog on hot days. Ethanol industry advocates say the claim is unfounded. 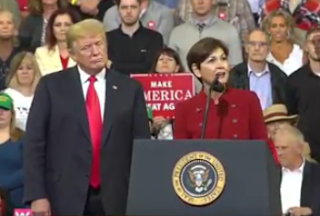 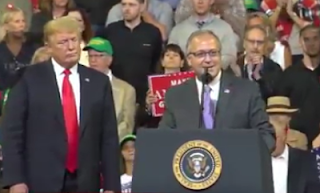 The entire event can be replayed from Fox News:

Posted by Stephen Leary at 6:24 PM