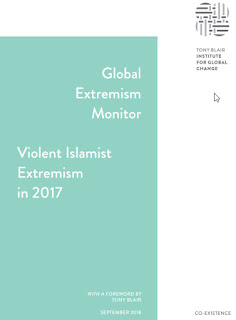 A new report from the Tony Blair Institute for Global Change determined that at least 84,023 people in 66 countries across the globe died as a result of violent Islamist Extremism in 2017.
Among the key findings:
The solution, the report said, is to fight the underlying ideology behind the attacks:

Ideology is the greatest tool for the global jihadi movement. The long-term fight against it will need a comprehensive, multifaceted strategy.

Security measures will be vital. But security alone will never be enough. It will only slow the violence. Unless there is a global will to meet the depth of the challenges, the ideology of Islamism will grow—and with it, the violence. It is time to act.

Watch: Violent Islamist extremism is a global threat, which saw thousands killed in 2017. Each year, our Global Extremism Monitor will track this threat and efforts to counter it. Read our first annual report here: https://t.co/iqclktSlmt

Posted by Stephen Leary at 8:16 AM