Morrisey is challenging incumbent Democrat Joe Manchin, who has been leading in recent polls. Morrisey's campaign conducted an internal poll within the past few days that showed a dead heat at 45%-45%. 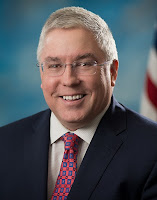 Trump is expected to rally support for Kavanaugh. A Senate vote on his confirmation was delayed until another FBI investigation is conducted regarding the accusations against him from Christine Blasey Ford.

Morrisey criticized Manchin for his conduct on the Kavanaugh vote, accusing him of "waiting until the outcome is effectively decided" before announcing his vote.


Everyone in West Virginia should be watching how Joe Manchin is behaving right now. He’s waiting until the outcome is effectively decided before he reveals his vote. Gutless. And he did exactly what Schumer wanted. Manchin gave Schumer the time he needed to obstruct. #wvsen
— AG Patrick Morrisey (@MorriseyWV) September 28, 2018

Manchin has accused Morrisey of wanting to "take away health care from people with pre-existing conditions." President Trump's coattails, he tweeted, can't hide "Morrisey's record of threatening educators...with a lawsuit."

Trump has called Morrisey "a hard working and spectacular person." And "a real fighter." The struggle to confirm Kavanaugh highlights Trump's need for more solid Republicans in the Senate.

Lou Holtz, former coach of Notre Dame and a West Virginia native, spoke in favor of Trump and Morrisey. Manchin, Holtz said, went to Washington and he forgot about the people of West Virginia and "does whatever Chuck Schumer tells him to do." 
Trump: "We are just five weeks away from one of the most important elections in our lifetimes."
"WE won the presidency. And we have the greatest economy that this nation has ever seen."
"We should do well in the midterms, but you can't get complacent."
"When you see what's happening in the Senate, the anger, people that are angry, mean and untruthful."

Two protesters were escorted out by security as they gave the finger to attendees. This happened at the same time that Trump was talking about the anger and hatred going on regarding the Kavanaugh nomination.

"The fake news media are truly the enemy of the people." 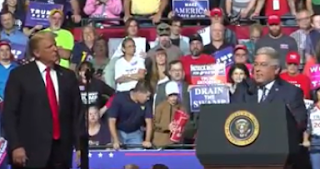 
Patrick Morrisey spoke for a few minutes, spelling out his differences with "dishonest Washington liberal Joe Manchin." Manchin, he said, "abandoned your gun rights. He abandoned your paycheck by opposing the Trump pay cuts. He opposed the Trump wall. When I'm in the Senate, we're gonna fight against all those regulations that defeat jobmakers. We're gonna ignite the economy even more. We'll make the Trump tax cuts permanent. We're gonna re-empower the people of West Virginia with term limits to hold the people in Washington accountable. And we'll all stand for the national anthem.
Because of Trump's last trip, we're basically even in the polls. I need you to get involved. I need you to volunteer. Help me close the gap of the liberal ATM machine of Chuck Schumer and Joe Manchin.
This race will likely decide the balance of power in the Senate. Remember those radicals in Washington...they don't want to see our president succeed. They want to obstruct. We must confirm judge Kavanaugh."

"A vote for Patrick Morrisey is a chance to vote for West Virginia values," Trump said. "It is a vote for me and a vote to Make American Great Again, or as we say, Keep America Great." This election "will decide which party controls the US Senate."

The Democrat Party, he continued, "is radical socialism. It is the party of crime. That's what it is. To pay for socialism, they want to raid social security. Giving it to people who don't deserve it. Giving it to illegal aliens who come into our country."

"They love those sanctuary cities where crime pours in," he continued. "ICE is doing their job. These are brave people. Remember you used to leave your doors unlocked? Now, it's like a fort. They clean out towns of truly bad people, dangerous people. America should be a sanctuary for law-abiding citizens not illegal aliens."

"Obama said before I took office that the biggest problem was North Korea and he was very close to going to war. Fortunately, his time was up. I got the hostages back. We got the remains of our heroes back. You don't have any more nuclear testing. You don't have rockets going up. I gave up nothing."

"We're fixing the one-sided trade deals that have stolen American wealth. We've reached a deal to replace the horrible NAFTA, one of the worst deals ever...and we'll see what happens with Canada. But they have to be fair."

"We reject the ideology of globalism," Trump said. "We love our country. That's our doctrine."

The entire Trump event can be replayed from Right Side Broadcasting Network:

Posted by Stephen Leary at 5:49 PM