The News Media Controls the Public's Mind on Trump, Kavanaugh

A new Fox News poll underscores the hammerlock the mainstream media has on the minds of so many people.

Currently, only 40% would vote to confirm Kavanaugh, down from 45% in August. 50% would not confirm the judge. More voters believe Christine Ford, even though every person she mentioned as at the party where Kavanaugh allegedly abused her have said they don't remember the party and can't corroborate her story. No one backs up her account. 36% believe Ford. 30% believe Kavanaugh. Why does the public believe her more than him when? 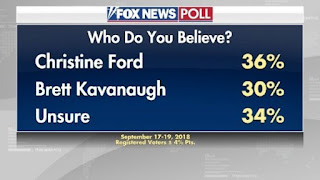 That these numbers in favor of Kavanaugh are so low at all is directly attributable to negative coverage in the mainstream media.

Recently the Media Research Center studied the depiction of Trump on TV News:

The media has trained viewers to see Trump as a volcanic, unstable hothead since before his election. The result?


A Quinnipiac poll released on September 10 showed 65 percent of voters thought the President was “not level-headed,” compared to 30 percent who thought he was level-headed, while a 55 to 41 percent majority said Trump “is not fit to serve as President.”

Viewers see Trump as the TV newscasters and print journalists want him to be seen--unstable and unfit for the White House. It's a fantasy designed to persuade voters to elect Democrats and throw Trump out of office in 2020.

A review of Google News reveals that substituting "Obama" for "Trump" produces far fewer results along these lines. Rarely is Obama described as "furious," "Outraged," or "fuming." The difference between the coverage of Obama and Trump is striking and betrays the narrative the mainstream media is selling.

And it works. The poll numbers prove it works.