The Doomed Pontificate of Pope Francis: All Bishops Summoned to Rome

Pope Francis has summoned all bishops to Rome in February in an attempt to find a solution and plot some sort of endgame to the sex abuse scandal that has raged like a wildfire during his tenure as pontiff.

The stated topic of the meeting is the "prevention of abuse of minors and vulnerable adults." No further details have yet been forthcoming. 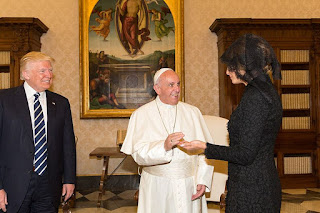 (Photo courtesy whitehouse.gov)
The announcement comes on the heels of yet another shocking report commissioned by the German Catholic bishops' conference. The report concluded that German priests had abused no less than 3,677 victims since WWII and that almost 5% of German priests had been accused of sexual abuse.

And recently in the United States, a grand jury found that 301 priests in the state of Pennsylvania sexually abused minors over decades as well.

This week, a delegation of US cardinals and bishops will travel to the Vatican to interface with Pope Francis over the sex abuse and cover-up scandal that has outraged Catholics in the US.

Attendant with the sexual abuse scandal is the problematic Christian faith of those who have abused minors. No one who sexually assaults a minor, surely, can claim with any degree of believability, that he is a believing Christian. Every priest who has sexually abused minors has lost faith and no one who has lost faith has any business celebrating mass.

The sentiment of church-going Catholics is clear: throw out all the bad priests. As things stands, catholics in the pews on Sunday have no idea if the celebrant is guilty or innocent, and the suspicion that perhaps he isn't a pious man is understandable.

Pope Francis needs to unequivocally remove all abusing priests from the priesthood and return the church to a moral and ethical entity. Under his lack of leadership, it lurches from crisis to crisis while he seems obsessed with his strange role as a social justice warrior who has torn the church in half along political lines.

Pope Francis is the wrong man at the wrong time, an earthly politician filling Peter's seat that needs a heavenly guiding hand.

Posted by Stephen Leary at 3:53 PM