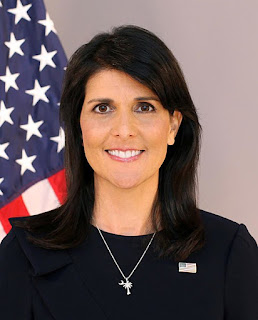 (Nikki Haley, US Ambassador to the United Nations)
Yet again, the New York Times was caught publishing fake news about the Trump administration.

This time, it was the drapes.

The Times was forced to issue a major correction, admitting that the decision to purchase the expensive curtains was made by the Obama administration:

An earlier version of this article and headline created an unfair impression about who was responsible for the purchase in question. While Nikki R. Haley is the current ambassador to the United Nations, the decision on leasing the ambassador’s residence and purchasing the curtains was made during the Obama administration, according to current and former officials. The article should not have focused on Ms. Haley, nor should a picture of her have been used. The article and headline have now been edited to reflect those concerns, and the picture has been removed.

The original article wasn't a clumsy stab at journalism but a vulgar attempt at character assassination. Charles Payne of Fox Business calls it an example of "Assassination News":


And this is why the public distrusts the news media. Articles written and published for no reason but to push a biased agenda on the political left. As Payne said:

The media lurches from one invented crisis to another, one character assassination to another. Meanwhile, anything resembling honest journalism is a long way from the biggest names in the news business, names and reputations that were earned long ago, not anytime lately.

Posted by Stephen Leary at 4:00 PM