My Review of David Horowitz' "Big Agenda: President Trump's Plan to Save America"

A Great Strategy If All Are Willing to Fight For It
By Stephen Leary
Despite all odds, political outsider Donald Trump won the presidency in 2016. But now he faces hostility from both Democrats and the GOP Establishment alike. How to push forward with his agenda when he faces enemies all around him in the Washington DC Swamp?
David Horowitz, in his book, Big Agenda: President Trump's Plan to Save America, tells us that Republicans aren’t interested in winning. They aren’t even interested in defeating the Democrats. They are working as hard as Democrats to defeat Trump. 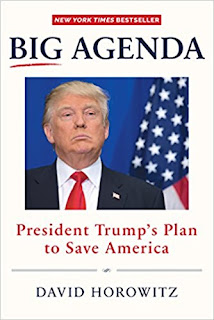 Republicans didn’t fight Obama’s radical agenda because they were afraid of being called obstructionists, afraid of being stigmatized as heartless or racist or xenophobic. They couldn’t produce a political response to those attacks.
The chief strategy of Democratic political campaigns is to use character assassination. Horowitz points out that Democrats often defend their candidates no matter what the charge and no matter what the facts, while Republicans are quick to condemn their own. For example, Paul Ryan and many other Republicans who jumped off the Trump Train when an 11-year-old sex-talk-video was uncovered of Trump using crude language.
What to do?
Horowitz presents his strategy. The goal is to put Democrats on the defensive. “This can only be done by taking away their moral high ground…expose their hypocrisy and turn their firepower against them.”
Resistance begins with the will to confront the adversary head on—as President Trump has done. But Republicans are often wary of engaging in battle, unlike progressives and communists.
Before Trump, not a single Republican figure would have dared call Hillary a crook and a liar to her face, although she is both.
The first response to an attack by the left is to attack them in a way that is equally strong, that throws them off balance and puts them on the defensive, Horowitz recommends.
The Achilles Heel of the Democratic Party: its monopoly control of the inner cities of America and its responsibility for the misery and suffering inside them. The big cities they control are the centers of the worst poverty, highest crime rates, failing schools, and general hopelessness. Trump’s “New Deal” offered law and order, $130 Billion scholarship program, and high paying jobs.
To combat leftist indoctrination in our schools, Horowitz recommends Republicans persuade university administrators to better reflect diversity of political thought. Republicans control the purse strings that can be used to restrain the progressive juggernaut. Add intellectual, ideological or political into their diversity mission statements.
Horowitz blames Republicans, and rightly so, for sitting back and allowing the liberal agenda to take hold in our nation to its detriment.  He presents many worthwhile ideas for taking back the nation.
But who will implement these ideas? The GOP Establishment? Hardly. To expect this group of Swamp Creatures to suddenly reverse course and change their nature is wishful thinking.
The problem with Horowitz’ prescriptions is they rely on Republicans to do something they haven’t done for half a century—confront the liberal agenda in our society. Washington DC is ruled by Swamp Creatures who have earned that ugly name for many solid reasons. They won’t change and nothing will be done as long as they are in charge.
The only change agents are President Trump and the #MAGA activists. But they are far outnumbered. The prospect of any significant change on these issues isn’t encouraging. Trump and his administration can only do so much without the full support of the GOP Establishment. But Horowitz points the way. It won’t be easy and total victory is a long way down the road.
Posted by Stephen Leary at 8:31 AM