Valentina Lisitsa is a concert pianist in the news primarily because the Toronto Symphony Orchestra (TSO) canceled her appearance due to political comments she made on Twitter. The American-Ukrainian pianist tweets often about the Ukraine-Russian conflict. She's also a good pianist as you can hear in these videos.

Jeff Melanson, the CEO of TSO, received complaints about her tweets (!) and decided her opinions were not consistent with those that the orchestra feels nice and comfy with, so another pianist was brought in. 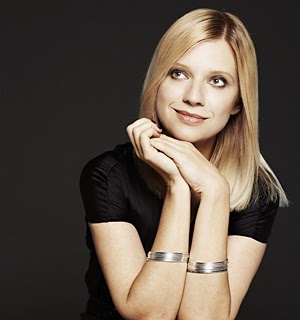 Anyone with any respect at all for free speech has been aghast at Melanson's decision, despite what anyone believes about world affairs in eastern Europe. I don't agree with many of Lisitsa's opinions, but I don't want her prevented from playing the piano!

Some rock musicians certainly do annoy me with their outspoken politics (incubated with decades of drug use, I'm convinced), but remove them from stages and recording studios over politics?

Melanson himself has raised eyebrows for his own behavior. He has been TSO president for less than a year, having unexpectedly quit his previous post as head of Canada's Banff Centre. His short tenure sounded something like a bull in a china shop--firing people left and right, and grandiose plans requiring massive investments that he abandoned, leaving the Centre high and dry. All the while he divorced his wife and became engaged to a singer.

His supporters admire his "energy, vision, and charisma." I don't see evidence that his "vision" includes the right of artists to speak as they see fit on politics. I'm skeptical those free speech rights inhibit their ability to play the piano, violin, or whatnot.

Melanson's comments since the Lisitsa controversy broke suggest to me he is the last person anyone should want in an artistic management position. Someone criticizes a tweet and his finger is immediately on the trigger to cancel her appearance? What's the dubious mentality behind that? Perhaps this is Melanson's "charisma" at work? I read his words and wonder what is someone like him doing in the arts, and will his tenure at TSO be as short-lived as it was at the Banff Centre?

I'll note here that the biggest problem in today's world is the wrong people worming their way into positions of power and authority all over the world--and it doesn't matter if we're talking about the Toronto Symphony Orchestra, the White House, or the Russian Presidency. And meanwhile the best people are nowhere near those levers of power.

Melanson, I hate to say, is typical of so many in the world today. If you don't like what someone believes, they have a choice: either turn around and say what you want, or be blacklisted and prevented from working or earning a living. The only opinion is mine, and anyone else must be quieted. Do most people in western civilization still believe in free speech, or only when it is convenient ("Je Suis Charlie," for example)? We hear it in the US news media every day. Anyone with an opposing opinion is vilified.