I'm pretty sure I admired Nelson Shanks' portrait of President Bill Clinton at the National Portrait Gallery several years ago, not long after the museum first displayed it to the public. It stood nearby paintings of his contemporaries: George HW Bush, Reagan, and Carter.

It's rare for a painting to make news headlines, except when sold for record prices, but this one did when the artist announced he had included the shadow of Monica Lewinsky's dress on the mantel. 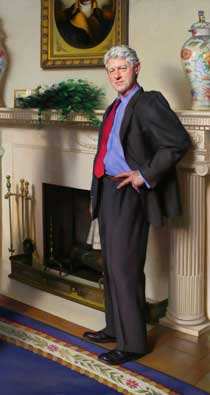 What I remember about the portrait was Clinton's hand and fingers at his waist. Shanks has him extending his index and middle fingers alongside his belt. The middle finger in particular seems to invite the attention of the viewer, as the role of the index finger is to support it. Shanks has been lauded for his superior renderings of human hands, and I can't help but feel that the shadow of a dress wasn't the only "hidden message" in this painting. You just can't miss that middle finger. But it all seems true to the subject.

Shanks follows in a long tradition of artists "hiding in plain sight" unflattering judgments of their lofty subjects. For example Goya's famous "Family of Charles IV" depicts the pompous royals as resembling "a grocer and his family who have just won the big lottery prize," as one critic said. 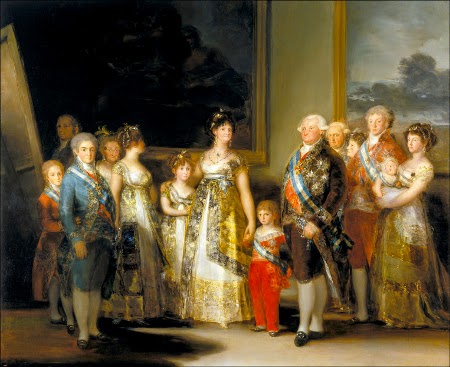 Exegesis of paintings and their meanings and hidden subtleties are usually left to the critics. What's unusual this time is the helpfulness of the artist who revealed what no one had previously noticed.

Writers explain their books on occasion. Nabokov felt the need to reveal the "secret points" of his novel Lolita, apparently to prove it was a work of high literature. But unlike Nabokov's Dolly, Clinton is a real person who really was the president.

Shanks worried Clinton had pulled strings to force the painting's removal from public view at the museum, although a gallery spokesman denies it. In its place is a non-traditional modernist portrait from another high-regarded artist, Chuck Close.

Will Shanks' honesty cost him future showings of future portraits of future presidents, one wonders. And what about the other artists whose ingenious brush strokes are hanging on the walls in the National Portrait Gallery? What undiscovered secret messages may be lurking heretofore undetected?