With Conan Doyle's signature on one of the books containing the 'lost' story, it seems likely he wrote it, despite the reservations of Sherlockians.

The authorship of the story has been challenged by experts. The Los Angeles Times reports the opinion of Les Klinger, author of "The New Annotated Sherlock Holmes: The Complete Short Stories," who feels it is likely the product of someone other than Sir Arthur Conan Doyle.

The UK Mirror quotes "Swedish Sherlock Holmes expert" Mattias Bostrom as saying nowhere in the booklet is Conan Doyle advertised as the author. And there is that strange referenced to Holmes' house on "Sloan Street," rather than his famous Baker Street address.

But Conan Doyle did attend the fundraising bazaar, so it would seem odd that someone would write a Sherlock Holmes story when the author was there as well.

These are questions that hopefully will be answered to the satisfaction of all in due course.

Take a look at my own mystery novel, "Murder at the Library Conference" 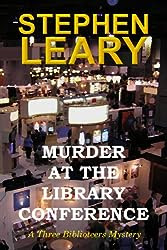 Posted by Stephen Leary at 7:50 AM