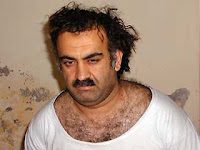 The vascular structure of the back of a hand is used to match a known person’s hand with that of an unknown person, to positively identify that individual.

Scientific papers are sparse. One recent study said “finger-vein based personal identification systems can be immune to counterfeit fingers and noninvasive to users” and the technique has some “excellent advantages” over traditional biometric characteristics, such as faces, irises, and fingerprints.

Vascular readers are used by some companies to identify employees, but are not widely used in North America. The technology is more popular in South Korea and Australia.

Mohammed is one of the terrorists currently incarcerated at Guantanamo Bay, Cuba.
Posted by Stephen Leary at 6:59 AM