This book is Ernest Hemingway's reminisce about his life in Paris in the 1920s and the literary figures he knew, such as Gertrude Stein, Ford Maddox Ford, Ezra Pound, and F. Scott Fitzgerald. It was left unfinished at the time of Hemingway's death in 1961 and originally published in 1964, edited by his fourth and last wife, Mary. This new "restored" version presents the same book as re-edited by Hemingway's grandson Sean. 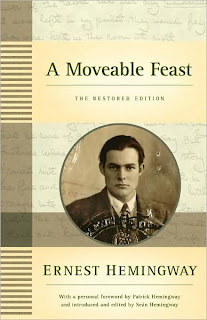 The original book is a highly-regarded literary work of art, leaving open the question of why the world needs a new version. The one and only advantage is the inclusion of new, previously unpublished chapters included after the main text, called "Additional Paris Sketches." Anything new written by Hemingway is always welcome.

The problem is Sean Hemingway's editing and the motivation behind it. In his Introduction, he would have us believe Mary somehow wrecked Hemingway's vision of the book and he has now reshuffled the chapters to reflect what his grandfather would have really wanted. Forty-five years after the original publication, Sean writes with what seems to me unusually strong venom at Mary and what he sees as her agenda in making her edits: "The extensive edits Mary Hemingway made to this text seem to have served her own personal relationship with the writer as his fourth and final wife, rather than the interests of the book, or of the author, who comes across in the posthumous first edition as something of an unknowing victim, which he clearly was not." Sean needed to provide some sort of rationale for the new edition, and this is what he would have us believe: the original book reflected Mary's wishes, not Ernest's.

But since the manuscript was left unfinished when Hemingway died, no one knows what he really would have wanted. There is no "definitive" edition and never can one be. Even worse, Sean can well be accused of the same sin as he asserts for Mary: his edits are designed specifically to paint his grandmother Pauline Pfeiffer, Hemingway's second wife and his own grandmother, in a far more favorable light. Readers and scholars can compare the two editions and judge for themselves: is Sean protecting his grandfather's true wishes--whatever they were--or is he doing a favor for his own grandmother at the expense of Hemingway's conception? Sean dug around in the archives and found some things that look good for his grandmother, included them, and rejiggered the original contents in her favor as well.

The good news surely must be that the various heirs of Hemingway can't destroy his work, no matter what their motivations. The text is still the work of one of the 20th century's greatest and most influential writers. Most readers won't need the new edition, as the original, as literature, hasn't really been improved upon. Scholars and Hemingway fans will want to see the new sketches. Probably 45 years into the future, a "scholar's" edition will be published, sans any input from the various heirs of Hemingway, in an attempt to "set the record straight."
Posted by Stephen Leary at 2:34 PM