The chance to meet Kreskin recently came up and we spoke for a minute or two. I recounted my story of first seeing his TV show on visits to Toronto in the early 1970s when I was a kid. He inscribed a copy of his book to me and gave me his business card. He's a friendly man and it was a delight to meet him in person. 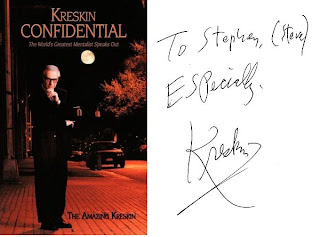 Kreskin's narrative takes us back to his childhood when he was inspired to a career in mentalism by the Mandrake the Magician comic books. He somehow found a hidden penny as a kid without help, and performed several times for his classmates.

Houdini, Kreskin tells us, was the greatest escape artist, but merely a second- or third-rate magician. Magic as seen on TV nowadays is mostly illegitimate, as it involves scripting, editing, trick photography, and paid or volunteer "people on the street" who have been coached by the producers how to act for best effect. This is more theater than magic, and is dishonest with the viewers.

His first late night TV appearance was on the Steve Allen Show, March 30, 1964 (billed as "George Kreskin"). As Kreskin tells it, this is the show where he stumbled during his entrance because he was blinded by the studio lights. He claims this inspired Johnny Carson to create the "Carnac the Magnificent" character (who always stumbles upon his entrance) from seeing him on the Allen show.

A severe chapter on Orson Welles recounts his blundering attempts at mentalism on Johnny Carson's show. He exposes some chicanery surrounding Jean Dixon's "predictions" as well.

There is no such thing as a hypnotic trance, he reminds us again, and Kreskin offers a reward for anyone who can contradict him. Hypnotism involves the power of suggestion, not an altered state.

Kreskin's trademark stunt is finding his own paycheck hidden by the audience. Over his career, he has failed to find it 9 times, and if he fails again, he will retire that part of his show. Considering how many times he has searched for his check, it seems remarkable he has failed (whether legitimately or didn't want to find it) only 9 times--especially when one realizes he isn't cheating.

A major point of the book is to drive home Kreskin's belief that there is a legitimate way to perform mentalism and an illegitimate method. The dishonest way involves the use of audience plants or secret electronic devices and other types of chicanery. Legitimate mentalism uses only those techniques and skills possessed by the performer himself, along with his props. Kreskin isn't talking about psychic mind reading, as if a person could really tune into the thought broadcasts of another person like turning on a radio, but rather the traditional performing skills related to stage magic. Playing "fair" with the audience using these guidelines means a lot to him and I can't see him violating this code of trust.

Kreskin has always said he uses no electronic devices or confederates in his show, and like the great pioneering mentalist Joseph Dunninger (1892-1975) before him, offers large rewards for anyone who can prove that he does. It's wonderful marketing and no one has any hope of collecting.

After explaining several mentalism stunts the reader can perform on his own, Kreskin then tells the story of meeting the respected magician Dr. Stanley Jaks (1903-1960) and unexpectedly receiving his library after his death. He is now interested in selling those books, listing the sales price at no less than $4 million, after turning down an offer of over $1 million. Kreskin issues a startling threat: if he doesn't find a buyer who will pay the price and properly care for the books, he may well burn them.

He mentions some problems at the Library of Congress, where Houdini's library and other valuable collections were mishandled. As someone who once worked there, I think there would be quite a number of reasons for that. And as someone who worked in an academic library special collections department, I think it would be imperative for a valuable collection to be placed where the staff and institution have a long-term interest in the person or subject matter, as well as the desire and ability to maintain the books and papers. How often is that the case? It makes me wonder what Kreskin's plans are for his own extensive library and manuscripts.

Kreskin has managed to keep himself in the public eye for over 40 years. In the 1960s, he marketed an ESP game that eventually morphed into an aid to accessing the subconscious called "Kreskin's Krystal & Pendulum." He hosted his own TV show in the 1970s and has made hundreds of guest appearances on popular talk shows over the years, such as Merv Griffin, Tom Snyder, Mike Douglas, and the Tonight Show. Kreskin challenged chess champions Anatoly Karpov, Victor Korchnoi, and Bobby Fischer, although they didn't respond. He makes annual predictions and claims he predicted 9/11 (the transcript from CNN, January 1, 2001, begins: "by September or October there will be two major plane crashes....") He backtracked after that, insisting he didn't really mean airplane crashes, but forgetting what he said later, it's a noteworthy prediction if you stop there. Kreskin still keeps a heavy personal appearance schedule.

From what I've seen, most professional mentalists like and respect Kreskin but there are some that don't, and they charge him with not coming entirely clean with the fact that his act is a variant of stage magic and he has no psychic or legitimate mind-reading abilities. But I keep reading statements by Kreskin, in this book and elsewhere, that he claims no special skills, and his abilities are "perceiving and influencing people's thoughts, both mentally and through suggestion." That is not uncommon for anyone inside or outside this profession.

Professional mentalists are in a position where "having it both ways" is good for business. Apparently Dunninger thought so. While professing no special skills for himself, he also wrote books like What's on Your Mind? and The Art of Thought Reading--the sole apparent point of which was to impress upon the American public that he possessed nothing less than genuine psychic thought-reading abilities.

Critics have cited the first edition of the book The Psychology of the Psychic (1980) in which Kreskin was lumped in with the likes of Uri Geller as someone claiming paranormal powers. However, in the second edition published in 2000, the authors removed the chapters on Kreskin, as they admitted he makes no claims to unusual abilities and therefore he didn't belong in their book.

Kreskin Confidential provides a good overview of the professional life of Kreskin from his beginnings up to recent days. He mentions the movie The Great Buck Howard (2008, based on his own life) a number of times. It's not anything approaching a thorough autobiography and can be read in a few sittings. For anyone wanting to know what Kreskin is all about, including his recent activities as well, this book is probably as good as any available right now.
Posted by Stephen Leary at 12:08 PM