President Obama this week finally had something to say about the stock market that has been crashing since he was sworn into office. He gave the country an investment tip: now is the time to buy stocks, since they have become so cheap lately. 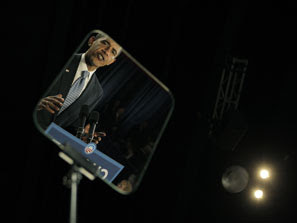 Already, just one month into his presidency, it is painfully clear that Obama knows little about the market and doesn't like the people of Wall Street. He seems completely detached from the economic crisis around him, refusing, or unable to do anything serious to calm the market. The equivalent of voting Present?

One can only wonder who gave him that investment tidbit he offered as a tonic for our troubles: his friend Warren Buffet, or perhaps the CIA, since we know the intelligence agency is providing Obama with a daily economic intelligence document about the economic crisis around the world.

Obama's behavior is causing concern not just at home but around the globe, particularly in Europe. Are Obama's psychological demons greater than Nixon's or Clinton's?
Posted by Stephen Leary at 4:59 AM