No one reads magazine fiction anymore. I know that because Esquire Editor-in-Chief David Granger said he has been trying to “breathe life” back into this formerly spry but now moribund literary outlet. 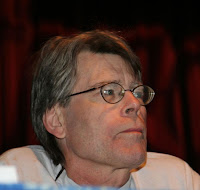 How to accomplish that? By publishing nothing other than “event fiction.” A good yarn written by an unknown writer isn’t enough. Nobody buys that these days. Some additional attractive ingredient must be present to call attention to the tale. An extremely famous author, for example, like Stephen King. Other ways to lure modern readers to short fiction? Presumably Esquire has more ideas up its sleeve. I hesitate to give suggestions.

“The Gingerbread Girl” (July 2007 issue of Esquire) begins with the death of Emily Owensby’s baby. It was “defective.” So Emily takes up running. She runs so much she pukes. Henry, her husband, argues with her about her new obsession. She hurls a book at him and flees the house, and her marriage.

Emily relocates to a shack owned by her father on the southern Florida coast near Naples. She runs along the beach and encounters a dead body in the trunk of a Mercedes. Soon thereafter, she unexpectedly meets the owner of the car. Jim Pickering can boast possession of a yacht, a Mercedes, and a winter home in Florida he inhabits when Chicago gets too cold, yet when Emily looks into his eyes, she “saw nothing in them she recognized as sanity.” In addition, he “looked crazy. In fact, there was no doubt about his state of mind.” Perhaps several Constant Readers are scratching their heads at this rather implausible creature.

Pickering laboriously binds Emily to a chair with duct tape so she can hardly move, even though his intent is apparently to rape and murder her. How to rape a person fastened securely to a chair? Pickering would need to kill her or at least knock her out, then undo all the tape, then rape her. But then, why the tape job in the first place? Just to ask who might know she was at his house? Why would such a madman even think about that?
Pickering improbably decides to exit the house to kill someone Emily said knew she was there. While he’s gone, she manages—after herculean effort—to free herself just as he returns. They fight. She wins. She runs through the house but can’t get to the main door to leave. Pickering runs after her. She’s trapped! She barricades the door to the room. Just as Pickering breaks down the door, Emily crashes through a window. Freedom! She runs along the beach with Pickering not far behind—and he’s carrying a big pair of kitchen scissors.Is Pickering what he seems or is he perhaps a physical manifestation conjured up by someone’s subconscious, a la the monster in Forbidden Planet? Emily needs to “explore the limits of her endurance”—Pickering obliges. She wishes there were a pill to get over the death of a child—she later calls his house “the Pillbox.” Overcoming Pickering is a necessary catharsis that would enable her to move forward with her life.How does it end? Poorly. I mean from a literary point of view. There is no “wow” ending here. This world ends not with a bang, but a whimper.Looking back on it, the story seems hardly worth the effort to tell it. A woman encounters a crazed maniac who ties her up, she escapes, he runs after her, one of them perishes and the story is fini. That’s pretty much it. It’s all too familiar and there is nothing remarkable to recommend the story.“The Gingerbread Girl” is a somewhat shaky launch of the new “event fiction” craft, but that’s judging only the fiction, not the “event”—which is Stephen King the famous author writing something short (that’s an event right there) for a magazine. And it worked on me—I bought my first copy of Esquire magazine ever. It’ll take a doozy for me to buy my second.

Posted by Stephen Leary at 1:59 PM